There are times in every working musician's career where you have to learn some music on short notice. For these examples, we'll assume that the band you're rehearsing with doesn't already have charts for you to read. We'll also assume that you simply don't have enough time to listen to the music enough to memorize it, so being able to write a "shorthand" part can be very handy. Think about the case where you've agreed to replace someone in a band, and then they decide to quit immediately, rather than wait for you to rehearse with the band. Now, you suddenly have to "learn" 40 songs in one or two days! Without the ability to write parts fast, you're stuck with improvising.

If you're a great player, you may be able to go improvise, and do well. And, after you've played the tunes, you'll memorize them, whether you're reading or not. But imagine how happy your new band will be with you if you actually "know" (because you're reading) the band's breaks, dynamics, and other details, on your first night...even without any rehearsal. The audience and the band both will appreciate you more, even if you're a great "guesser". Some will be amazed, and think you're a "genius". 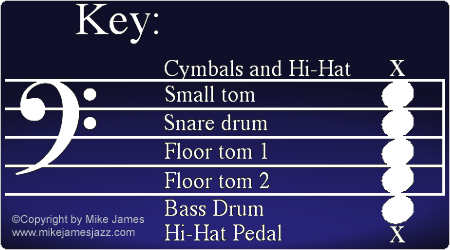 I follow the generally-accepted form of drumset notation, shown here on the right. The more you listen to the music, for it's "flavor", the less you'll have to write, because it'll be fresh in your mind. In these "emergency" cases, we're not trying to exactly duplicate every nuance and fill, but we're trying to be accurate to the main content of the song. You'll see that when I write "shorthand" parts, I don't get too specific, unless I feel that I need to. After all, we all have different drum setups, different sounds, etc., so there's little point, unless you've set out to transcribe a part exactly, the way you might for an instructional book.

To illustrate some simple nightclub dance band examples of this, here are some shorthand drum parts I wrote for dance bands, that are the type to get you through an evening. These are tunes you've probably already heard, to make it easier. Listen as much as you can, then write what you need, to refresh your mind on stage. You don't want to be guessing, when the leader calls the tune, and they may expect you to count it off, too, so make a tempo marking, and be as accurate as you can.

If you've listened to the tune a time or two, this chart has all the important "form" info you need.

I use the "@" symbol above, as an abbreviation for "approximately" or "about", when the leader has told me that a section might be "stretched" or "vamped". You can invent whatever symbols you want for these things, but it's best to keep them reasonably standard. That way, you don't forget what you meant, and if need be, you can pass these parts on to another drummer.

Here's another one you've heard in nightclubs.
It has a few more 'kicks", easily noted in this part that is still very simple.

If you watch the Discovery Channel, you've definitely heard this one. (Theme for "The Deadliest Catch")

I've been using shorthand like this since I was a teenager. Notice that the tempo, feel, (and feel changes, if any) dynamics, and fills are all included in the very simple notes. It's more information than it looks like, at first glance. They're "shorthand", but still understandable to anyone who reads music. That means that if you need a sub for a night, and they read, they can use your charts. Or, when you leave, they could be passed on to the next drummer.

Don't be "random" with your fills...
On the sample parts here, I simply wrote "drum fill" in certain spots, because after listening to the tune, I knew that the details of the fill were not critical to the band parts. When you're supposed to play a "figure" or "fill" with the band, write it out so that as you glance at the chart, you know if you're expected to play something specific, rhythmically.

Since you're likely to be making a LOT of these in a working band, keeping them in alphabetical order is a good idea. That way, it only takes a few seconds to find any tune that the band calls.

Here are some sample parts from known jazz big band recordings. You can follow along with the links I provide with each chart, or use your own recordings. Each arranger has a slightly different style of presenting what they expect from the drummer. Most writers tend to outline the band parts, rather than actually write a detailed drum part, and that's appropriate in most cases.

If you're a fan of either Count Basie or Buddy Rich, you've heard this chart.
There's a recording of Buddy playing this chart on my Buddy Rich Concert Clips page.
(Scroll down to the concert at "Buddy Rich in Europe - July 8th, 1986)

This is a very intense piece of music written for the Buddy Rich band.
There's a recording of Buddy playing this chart on my Buddy Rich Concert Clips page.
(Scroll down to the concert at "Mother's" nightclub in Milwaukee - February 10th, 1974)

Another chart written for the Buddy Rich Band.

There are two examples of this tune on my site for you to listen to... There's one of me playing this chart on my Musical Projects page, with a big band I put together, and there's also a copy of Buddy Rich playing it on my Buddy Rich Concert Clips page. (Scroll down to the concert, "Davenport Theatre" - Stockport, England - November 11th, 1986.)

Back to top of page

Unless otherwise noted, all content on this site is ©Copyright by Mike James - www.mikejamesjazz.com